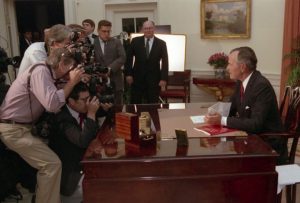 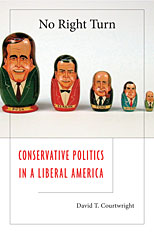 “Crisply written, colorful, and often out-of-the-box original, this is a bold, sweeping look at the last four decades of American history.”
—Gil Troy, author of Leading from the Center
read more >

From Richard Nixon to George W. Bush, American politics supposedly took a right turn. Culture warriors blasted secularists while Republicans used popular anger over crime, drugs, welfare, and taxes to win office. Democrats learned to shun the liberal label or, like Bill Clinton, to tack toward the center. Yet, for all the tough talk, no national politician slowed the culture’s leftward drift or reined in the size and power of the government. No Right Turn tells the story of their failure—a failure that puzzled and ultimately enraged principled conservatives of both the moral and economic stripe.